Boston Metal airs tonight on NatGeo and the Boston Herald mentioned it in today's Inside Track:


That the Morrissey family, a Brockton scrap metal-dealing brood, are kind of like the Wahlbergs of Dorchester. But Donnie Wahlberg, the executive producer of their new National Geographic Channel reality show “Boston Metal,” tells us “they fight better!” The “Blue Bloods” star said he met the scrappy clan through his brother, Bob, but at first he didn’t find their life compelling enough for reality TV. “After I got to know them, I couldn’t resist,” said the NKOTBer. The father and one of the sons are former mixed marital arts fighters, and daughter Kathleen doesn’t take any crap from the scrap peddlers. The show, which couldn’t compete with “Blue Bloods” of course, airs at 9 p.m. tonight.

GettyImages posted some new video clips and images from the set of Blue Bloods. 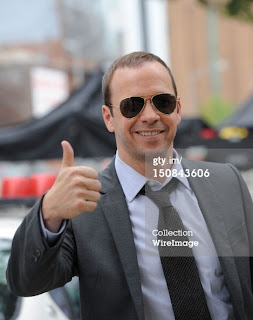 Donnie will be tweeting live during Blue Bloods next Friday.