Here is an article from Billboard.biz about NKOTBSB and the Billboard Touring Conference that Jonathan attended yesterday: 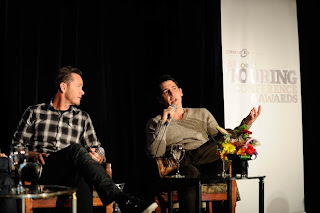 2011 was in need of a good comeback story, and it came in the form of NKOTBSB. The New Kids on The Block-Backstreet Boys super-group exceeded industry expectations this year when their combined tour sold out arenas and stadiums across the country and sold more than 500,000 combined tickets. Dates for an upcoming spring 2012 run in the U.K. and European Union are still selling out in just minutes' time.

A logistical nightmare on paper -- two bands, nine members, two giant music catalogs, two managers -- was quickly streamlined from the get-go. The NKOTBSB team quickly assigned one creative director and one production manager to centralize the creative strategy, while Sony quickly stepped up to combine the bands' respective catalogs for a retrospective album and license new songs.

New Kids manager Paul said more than a half million dollars of national marketing spend went into promoting the tour, in addition to a series of high-profile media appearances. "The idea that both management companies would take the time to get their guys to fly to San Francisco to do a radio show then stand up in Times Square and do 'New Year's Rockin' Eve' then go back and do 'Dancing With The Stars,' it does add up. But in the end it's all part of the success."

Backstreet Boys manager Katsis looked to similar tours like Elton John and Billy Joel as evidence that combined tours can be big draws. "We won't be able to compare ourselves musically to them, sure. But compare them and they're both one plus one equals three," he said.

Ego deflation played a big part, too, in getting the two grown-up boy bands to unite forces. "I didn't want to walk into a room and say, 'Who's bigger than the other?' Let's do something different," Katsis said.

New Kids' Knight added, "I think with my group and I'm sure it's the same with Backstreet, we were just brought up to be very down to earth, humble people. We appreciate everything that's come our way. A lot of that attitude we had came out in the creative process."

The success of the U.S. tour and the early sell-outs from the upcoming European leg prompted several panelists to indicate that more dates may soon be added. "I'm 51% sure it will happen," Knight teased.

But Katsis has other plans, too. "It's really important that the bands do go back to headline status on their own tours. We have some plans for that."
Posted by NKOTB News at 4:54 PM