Here is an article from the Boston Herald with some more details about Joey McIntyre's upcoming Christmas Album: 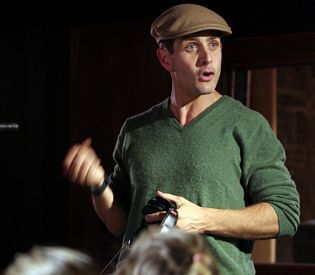 Don’t say we told you so, but New Kid on the Block Joey McIntyre will team up with Stoneham’s Mario Cantone of “Sex and the City” fame for one of the tunes on Joe’s upcoming Christmas CD — a single-sex version of the classic “Baby It’s Cold Outside,” redubbed “Buddy, It’s Cold Outside!”

“It’s kind of a different take on it,” laughed Joey, who has known Mario for many moons, ever since he co-starred with Cantone’s hubby, Jerry Dixon, off-Broadway in “Tick, Tick ... Boom!” in 2001.

“I don’t know where it popped into my head,” said the very-straight New Kid. “But I thought it was a cool idea.”

Joey Mac has other guests contributing vocals on the new holiday album, including a pack of his nieces and nephews and his sis, Carol.

“It’s going to have the vibe of an old-time radio show,” he said. “Like ding-dong, look who just showed up. Let’s sing!”

As for Mario, he recently revealed on “The View” that he and Jerry tied the knot after 20 years of unwedded bliss.

“We’re older now. We’ve been together 20 years. After 20 years you’re like, ‘Thanks for the anticlimactic honeymoon, government!’ ” Cantone told the ABC chatfest ladies.

The wedding was officiated by pastor Jay Bakker, son of the late Tammy Faye Bakker Messner.

“It was beautiful, just my family there,” Cantone said. “I love him. He’s a good man.”

Hope Jerry doesn’t get toooo jealous when he hears Joey crooning to Mario!
Posted by NKOTB News at 2:07 PM