Here are some videos of Donnie filming a scene for Blue Bloods on top of one of New York's double decker buses:

CBS posted some photos from some upcoming Blue Bloods episodes. 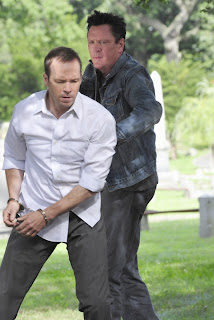 Danny and Joey have recently won BiLLe's Celeb Charity challenge in which they raised money for Remember Betty/Susan G Komen and the Alzheimer’s Association! This week Jordan is in the running to win money for his charity (Dancing for Hope/St. Mary's Center). Go to http://celebcharitychallenge.org/ to vote. One random voter will also get a chance to meet Jordan if he is the winner.

Mixtape Festival tweeted that they hope to have the NKOTB meet and greet photos uploaded in about 2 weeks!