NKOTB tweeted they are giving away a pair of Side A VIP tickets to Mixtape Festival and the details will be announced tomorrow. They said to make sure you follow @MixTapeFestival on Twitter

Here are some more videos from the Blue Bloods set:

You can't really see Donnie until the third video, but here is some behind the scenes clips.

According to OLV, Blue Bloods is filming around Worth and Mulberry St (around courts) in NYC and around Vesey St and Noth End Ave in NYC tomorrow.

Jonathan shared this photo of him and a chicken on Twitter today: 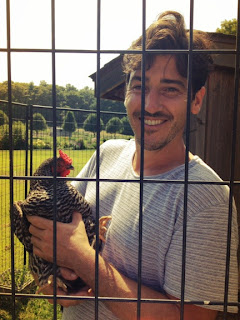 And just for fun, vote for NKOTB on Parade's All-Time Favorite Boy Band Poll.
Posted by NKOTB News at 9:11 PM