Blue Bloods filmed at a park in New York city recently and here is another nice behind the scenes video of Donnie on the set from MiyaPark.

WireImage has some photos of Donnie and Jennifer Esposito on the set of Blue Bloods. View the rest of them here! 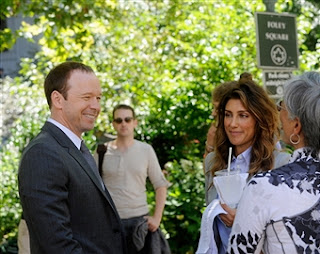 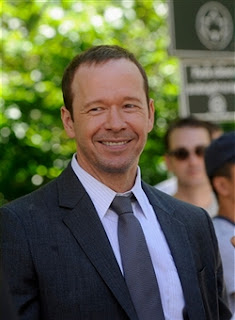 Corbin Bleu will be in an upcoming episode of Blue Bloods. He will portray a cop who accidentally shoots and kills an innocent man, resulting in major emotional distress. (Source: TV Fanatic)

The Hingham Patch reports that Wahlburgers is giving their Facebook fans the opportunity to create their Burger of the Month.

And speaking of Wahlburgers, Steve Carell likes their food so much he would choose it as his last meal on Earth!  (Source: BON APPÉTIT)

According to a Tweet by Remember Betty, they are only $158 away from being the number one National Team for Komen! Check out their website to find a race to participate in.

The Backstreet Boys are also giving away a pair of Side A VIP tickets to the Mixtape Festival.  They said to follow them on Twitter and they'll announce how to win tomorrow.

Have questions about Mixtape? There is some updated info on these resources: