Here is an article from Toronto.com about Donnie and Blue Bloods. 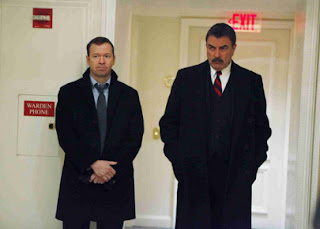 It has been 28 years since Donnie Wahlberg burst into the bedrooms of teenagers around the world as part of boy-band pop sensations New Kids on the Block. Now, at 42 years old and the star of CBS cop drama Blue Bloods (airing Fridays at 10 p.m. on CTV), the Bostonian is known as much for his acting as his ability to make girls swoon to his treacly ballads and suggestive hip thrusts.

According to one of Wahlberg’s Blue Bloods castmates, he’s as popular as ever with his many female fans. “Everywhere we go, there’s like 15 to 20 to 30 girls out there waiting,” says Amy Carlson, who, along with the rest of the cast, was sitting for a round of interviews to promote the show at its New York set. Carlson plays the wife of Wahlberg’s character, hard-hitting detective and soft-hearted family man Danny Reagan. “We could be at a cemetery shooting in the rain and I’ll be like, ‘How did they find us?’”

Wahlberg, who alongside veteran actor Tom Selleck, leads the show, says he’s grateful for any support he gets and usually stops for photos with his fans: some in their teens, some in their 20s and others now all grown up. They find him through a website that lists the show’s shooting locations.

“Sometimes, literally, I’m leaving work and the fans will say ‘Okay, we’ll see you tomorrow!’” says Wahlberg. “And I’ll ask them, ‘Where am I shooting tomorrow?’ And they’ll tell me.”

Blue Bloods, the ninth-most watched show on Canadian television last year, is now in its second season and has been praised for combining exciting police drama with a sensitive look at life in a cop family. It focuses on the tight-knit Reagan clan, of which New York Police Department commissioner Frank Reagan (played by Selleck) is the patriarch.

Although he has played a lot of cop throughout his acting career, Wahlberg says the personal element depicted in Blue Bloods has taught him a lot more about police life. “When we watch Law & Order or shows like that, we don’t see the cops go home, we don’t see them with their families, we don’t know who they’re going home to and we don’t always value the importance of getting home.”

That nuance extends to Wahlberg’s character. Real-life police like that Danny isn’t afraid to break some rules in the pursuit of justice, Wahlberg says. “They don’t endorse what he does, but they understand and wish they could sometimes. He’s not bullying people for no reason; he’s pressing as hard as he can to get justice. A lot of cops would like to have that freedom.”

For Selleck, the character-driven story is key to Blue Bloods’ success, much as it was to his hit 1980s show Magnum P.I. “If you really think about Magnum, you know my shorts may be too short now and out of style, but it’s in 100 countries,” says Selleck, still sporting the thick moustache that helped make him famous. “It isn’t in 100 countries because of the plots. It’s in 100 countries because it’s a character-driven show and the problems, whether funny or serious — and they were both — are people problems. And people problems don’t change over generations.”

In that way, the two shows are alike. “Magnum still translates, and I think Blue Bloods translates and seems to be crossing borders because of the police work aspect, but certainly because of the family.”

Canadian actor Len Cariou, who plays Selleck’s father and retired police commissioner Henry Reagan, says the show also resonates with such a wide audience because of the familiarity of its family dynamics, exemplified by the Reagans’ weekly dinner ritual.

“A lot of people say, ‘Hell, I used to do this every Sunday,’” says the 72-year-old Winnipegger. “I did when I was a kid growing up. Sunday was the big meal, we all sat down to a family dinner. My father was a travelling salesman, so we only saw him on the weekend. It was pretty sacred time.”

In many modern families, the TV set has replaced the dinner table as the social gathering point, but in that way, too, Blue Bloods is bringing them together.
Posted by NKOTB News at 6:01 AM