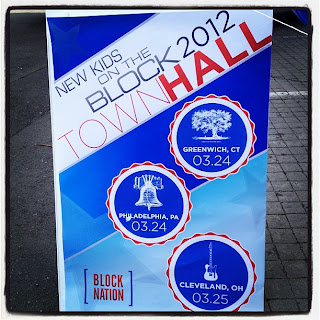 Photo from meesheface
Here are some of the highlights from the first NKOTB Town Hall: 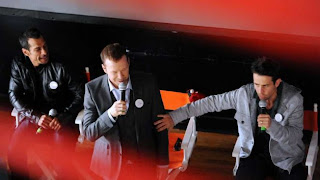 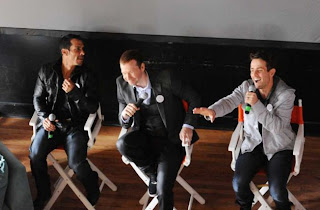 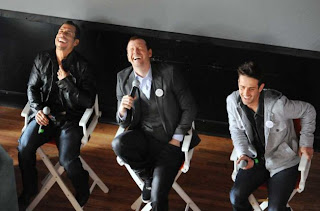 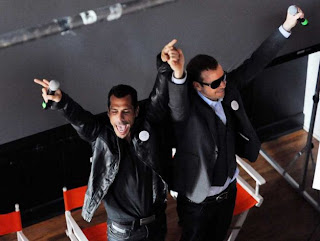 Check out the rest of their photos here.

Here is the article:


Like most teenage boys in the late 1980s, Anthony Stabile wouldn't have been caught dead enjoying a New Kids on the Block song -- even "Hangin' Tough."

But on Saturday Stabile, 35, proudly accompanied his former girlfriend to the Arch Street teen center in Greenwich, where three members of the reunited pop group appeared for a special event with their longtime, mostly female, fans.

"I think I always liked the old stuff, but as a 12-, 13-, 14-year-old boy, you had to put up that front," said Stabile, of Howard Beach, N.Y., whose then-girlfriend, Christine Darnell, took him to a New Kids show after the group got back together in 2008. He has seen them 11 times since then.

"I've probably been to a total of 200 concerts in my life, and they easily put on one of the most entertaining shows," Stabile said.

At Arch Street, it was as if 25 years hadn't gone by, with women in their 30s and 40s lining up outside the teen center for an intimate meeting with band members Donnie Wahlberg, Joey McIntyre and Danny Wood. Jordan Knight and his brother Jonathan couldn't make it to the event, billed as a town hall-style meet and greet with members of "Block Nation," the New Kids fan club. Tickets were given out to winners of a contest on the group's website.

Some of the attendees, who came from around the tri-state area, carried homemade signs, while others wore the jumbo buttons they had stored away in their attic since 1989.

Eileen Perez, who traveled from Brooklyn, N.Y., said the group's music was still as "amazing" as it was all those years go. The main difference now is they don't need their parents to snag tickets to sold-out concerts, or give them rides to special appearances.

"It feels the same, but we're older," Perez said. "Now, we don't have to ask mom and dad if we can borrow money. We pay for it ourselves."

Maureen Harju, 67, didn't begrudgingly come with her daughter, Stephanie, from Westfield, Mass. Harju said she was a big fan of Wahlberg, who followed in the footsteps of his actor brother Mark, and now stars on the CBS cop drama "Blue Bloods."

Stephanie Harju said she was a member of the group's fan club in the 1980s as well, but didn't get to meet any of the New Kids after concerts at huge venues in Syracuse, N.Y. and Boston. She's met them twice since they reunited.

The event was put on by KingSize USA, an event production and marketing company owned by Matt Hanrahan. Kyle Silver, director of Arch Street, said Hanrahan had played with his band at the teen center years ago, and reached out about holding the New Kids event there. A similar event was taking place in Philadelphia on Saturday, and in Cleveland, Ohio, on Sunday.

Perez and others said the group is now much more accessible because they communicate with fans through Twitter, and hold regular events like the one on Saturday. There is also a New Kids on the Block cruise from Miami in June.

Wahlberg and his bandmates talked about the cruise during their discussion with fans, which held true to its political theme, with Wahlberg referring to himself as a presidential candidate, and Wood as his running mate.

Discussing the band's upcoming tour of Europe and Australia, McIntyre quipped that "we can't be isolationists."

"We need to keep the trading borders open with our people overseas," replied Wahlberg.
Stabile used the format to his advantage, asking the New Kids for their assistance in convincing his friend Darnell to start dating him again.

"You guys are beautiful together," McIntyre said, after bringing in Stabile and Darnell for a group hug. "Start having kids together already."

After one fan said she enjoyed exercising to the New Kids' music, and asked whether the group would come out with a workout DVD, Wahlberg made a nod to the mega-merchandising of the late '80s and early '90s.

"What we don't want to do is make the mistakes of 25 years ago, when everything in the world has a New Kids on the Block stamp," Wahlberg said. "We only want to do it for the right reasons."

Newer Post Older Post Home
Subscribe to: Post Comments (Atom)
Top Stories
NKOTB in Hawaii
The New Kids on the Block are playing 3 nights in Hawaii on August 5, 6, and 7th!
NKOTB Cruise 2022
Limited cabins are still available for the NKOTB cruise on October 20-24, 2022!
New NKOTB Music
"Bring Back the Time" (BBTT) with EnVogue, Salt-N-Pepa and Rick Astley is out now! Get it here and watch the music video!
NKOTB News on Social Media
For breaking news, follow "NKOTB News" on social media: Twitter  |  Facebook  |  Instagram