Jordan is in the studio this week working on the new NKOTB CD! Here is a photo he shared of him working with ReddHott. 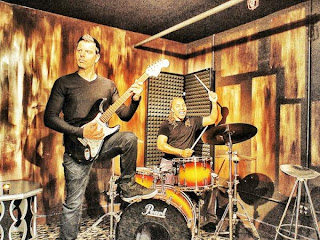 Billboard posted the top money makers in the music business in 2011 and NKOTB was #36.

#36: New Kids On The Block
$5,519,805
Like tour mates Backstreet Boys (No. 33), the re-formed New Kids on the Block earned quite a bit in 2011 thanks to the co-headlining NKOTBSB tour. The bill was the 17th-most successful tour last year. Traveling across North America, Europe and Australia, the New Kids performed their hits onstage with BSB (and vice versa), and this year the tour is playing overseas. While the group hasn't recorded an album of new material since 2008, a compilation of both groups' greatest hits, a pair of joint recordings and a mashup pushed NKOTB's album sales to nearly 83,000 units in 2011.