The NKOTB and Us book will be released on October 2, 2012 and the official title will be "New Kids on the Block: The Story of Five Brothers and a Million Sisters".

Here is an update from 993 The Vibe's Facebook page about their special Jordan Knight contest:

JORDAN KNIGHT RECAP: There will be an EXCLUSIVE VIBE Pre-Show party on Saturday, 3/24. LIMITED number of guests, NO TICKETS TO BUY. The only way in is with US! LISTEN for MANY WAYS to get on the guest list. Whether you live in the 'Burg or NOT, if you're heading to the area for the show - you have the chance to win! Keep an eye on Facebook, Twitter, and our website and of course...LISTEN FOR MORE INFO!!

Here is a short video clip of Joey and Howie talking about One Direction:

Here is a cute picture of Joey and his daughter "KK" (Kira) he sent out via Twitter today. 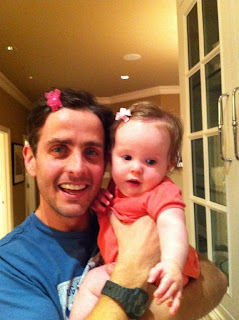 World of Johnny will be announcing an event (possibly with Donnie?) on March 11 in Los Angeles. Follow his Twitter page for details (which he will post probably later today).

The Hingham Patch reports that Donnie recently made a surprise appearance at Wahlburger's.

Kirk Cameron is back in the headlines after he voiced his feelings about the gay community in an interview with CNN’s Piers Morgan, saying that being gay is "unnatural."
"I think that it's - it's - it's unnatural. I think that it's - it's detrimental, and ultimately destructive to so many of the foundations of civilization," he said. "Marriage is almost as old as dirt, and it was defined in the garden between Adam and Eve. One man, one woman for life till death do you part. So I would never attempt to try to redefine marriage. And I don't think anyone else should either. So do I support the idea of gay marriage? No, I don't."
His statements angered another heartthrob of the 1980s, New Kid On The Block Jordan Knight, who only had this to say on Twitter in response: "Seriously Kirk?"
Jordan, whose fellow New Kid and brother Jonathan Knight came out publicly last year, later added, "Get right with yourself on the inside... Ya won't have to take the fight to the world.. #justsayin."
And he isn't the only one standing up against Kirk and his anti-gay stance. GLAAD also quickly responded to Kirk’s comments. "In this interview, Kirk Cameron sounds even more dated than his 1980s TV character," Herndon Graddick, senior director of programs at GLAAD, said in a statement. "Cameron is out of step with a growing majority of Americans, particularly people of faith who believe that their gay and lesbian brothers and sisters should be loved and accepted based on their character and not condemned because of their sexual orientation."