Jonathan Knight talks to Boston 25 News about The Trustees 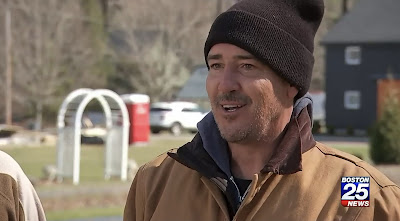 If you follow Jonathan on Twitter, you have probably seen his posts about him dealing with a land preservation organization known as "The Trustees". Boston 25 News interviewed Jonathan before he went on tour and they did a news segment about the dispute. Click here for the video!

Jonathan shared a link to this report, and posted this tweet last night:

Thanks Fox news and @KerryKavanaugh for helping bring my plight to the publics attention. While the @trustees response isn’t completely true, their lies will be exposed after we depose their employees as they hide behind their attorneys. Of course they can still lie under oath.

Below is the article that accompanied the news report: 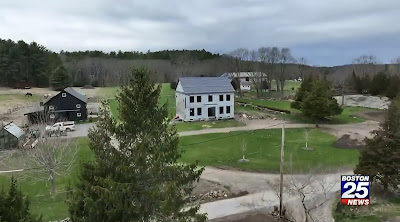 ESSEX, Mass. — A unique battle is unfolding on the North Shore, and it involves a member of Boston’s own New Kids on the Block.

The state’s largest land trust is suing singer and home improvement show host Jonathan Knight, claiming he’s trying to develop land he owns in ways that violate the restrictions on the land.

But Knight is fighting back. He recently showed Boston 25 News’ anchor and investigative reporter Kerry Kavanaugh around the land in question.

The dispute, which has been unfolding for years, involves a barn, a structure still under construction on six acres of land in Essex. The land is managed under a “conservation restriction,” a set of rules that aim to protect and preserve it..

“I love the idea of land conservation. I love what The Trustees do. But sometimes it just gets to be a little too much,” said Knight, who, when he is not performing or hosting his home improvement show, is on his Kings Court farm caring for his horses, goats, and chickens.

Knight owns the land and his friend Scott Harmon manages it. The conservation restriction, meanwhile, is managed by The Trustees of Reservations, the nation’s first and Massachusetts’ largest preservation and conservation nonprofit, per TTOR’s website.

The Essex land was originally a 100-acre farm, which has been divided up. But owners must still maintain its agricultural qualities.

Knight says the dispute all started when he asked to make a “simple” move.

“Originally, all I asked was to move the house off the main road to a place that’s a little more quiet,” he told Kavanaugh.

Now, almost six years later, The Trustees are suing him.

According to Knight, the initial argument centered around the meaning and intent of the phrase in the conservation restriction “substantially in the same location.”

“What is substantially the same location?” he questioned.

Knight says he wanted to move the house 120 feet further away from a noisy road, but The Trustees wouldn’t let him.

He ultimately moved the home across the road to a property that is not under the conversation restriction. Knight claims he then had the right to replace the structure he removed.

“I sat in my kitchen with The Trustees and my lawyer, and we discussed building a barn that would be converted into a house because in the restriction it just talks about structures. It doesn’t talk about their use,” he said. “They said it would be a simple process. It would just be a vote in on the board, and they don’t think it would be that much of a big deal. That meeting never happened. Then they come back to me and say, ‘We don’t trust you. You’re going to rent it out to Airbnb and all this crazy nonsense.”

In its lawsuit, The Trustees claim that Knight and Harmon knew the rules and still persisted on a “development campaign” that goes against the restrictions.

Knight says he was well aware of the restrictions and knew what he was getting into. But he claims The Trustees are always changing the rules.

“So for the past six years we’ve been negotiating with them and it just goes nowhere. And then they push the goalpost somewhere else and it’s just constantly going. Nothing gets resolved,” he said.

In an emailed statement the organization said:

The Trustees has protected natural resources and stewarded some of the state’s most distinctive and special places for 130 years. The Trustees holds hundreds of conservation restrictions across the state, which are established and authorized by the Commonwealth to preserve open space forever.

In the case of the Bothways Farm conservation restriction, The Trustees is required to maintain the agricultural and scenic value of the land as specified in the conservation restriction that we have been carrying out for 46 years. Despite the property being purchased with the knowledge that certain restrictions were in place, such as a prohibition on the construction of a new or expanded residential building that exceeds 25 percent of the original residence’s size, the landowners have repeatedly attempted to violate the CR and have twice begun construction under false pretenses that required The Trustees to issue a cease and desist letter. We appreciate the owners’ love for the property and have worked diligently over the last six years to maintain an open line of communication with them, but it is The Trustees’ legal responsibility to protect the land as spelled out in the conservation restriction. Also, we enforce the rights and obligations of owners of all properties subject to this specific Conservation Restriction equally according to the plain language of the Conservation Restriction.

While we view legal action as a last resort and still hope we can come to an amicable agreement, we will not make exceptions that run afoul of our responsibilities to protect land that’s been under our care for nearly half a century. The Trustees is confident in its case and looks forward to the continued stewardship of this beautiful property in perpetuity.

“We’ve tried coming up with some compromises, but they don’t like our compromises,” said Scott Harmon, Knight’s friend who manages the land. “They want to change the conservation restriction so they have more control than they do now.”

Harmon and Knight claim they want to play by the rules. But the rules change, and they seem to be different for neighbors who are under the same restrictions.

Knight and Harmon both said they hope for an amicable resolution soon.