A new boy band documentary is in the making! It's based on the book by Maria Sherman 'Larger than Life: A History of Boy Bands from NKOTB to BTS'. They are looking for "superfans" to share their experiences and memories of their favorite boy bands. If you're interested in participating, send an email to the address in the image below. Note: if you're entering for the New Kids on the Block, you have to be in the Boston area, or be in town for their Boston concerts in July. 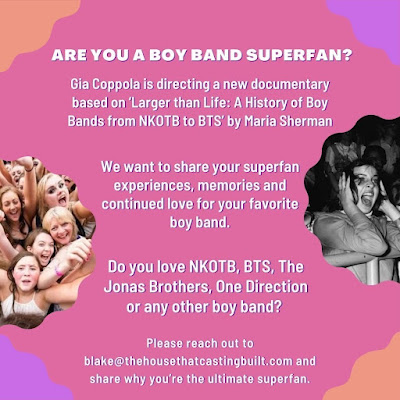 Check out some more photos from last Saturday's "Wahlk of Fame" event from Fox Valley Magazine and Glancer Magazine. 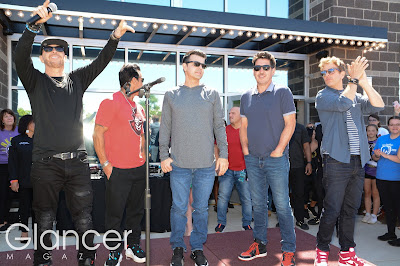 The New Kids had a rare 2 days in a row off earlier this week, so Jonathan went home to film some more for Farmhouse Fixer. Here's some adorable photos of Jonathan, Kristina, and Harley with a little piglet: 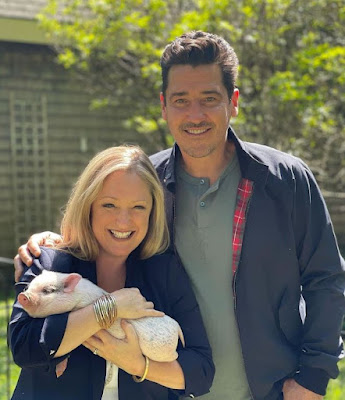 From Jonathan's Instagram: If I have to spend my NKOTB day off working…. This is how it would go down. #FarmhouseFixerHGTV #kristinacrestindesign 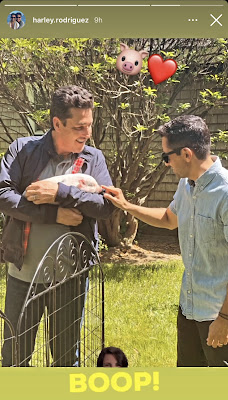 From Harley's Instagram story
Donnie flew into Cleveland on the day of the show: 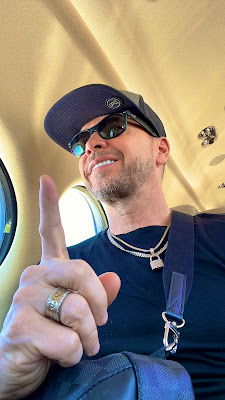 But he stuck around Cleveland/Akron area on his day off yesterday. He got a round a golf in with Joey, Griffin, and Earl: 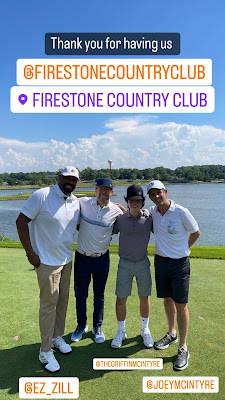 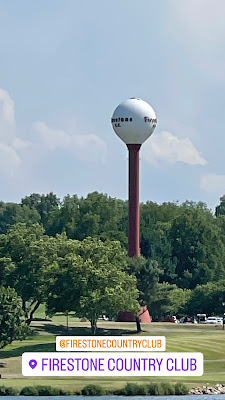 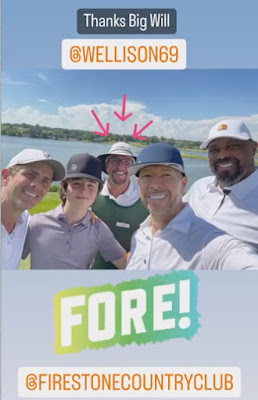 Last night he went to a Waffle House! 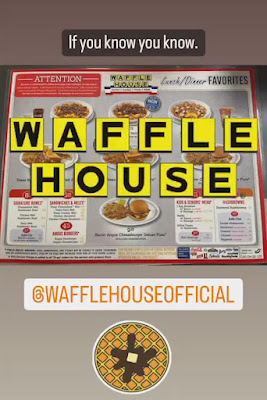 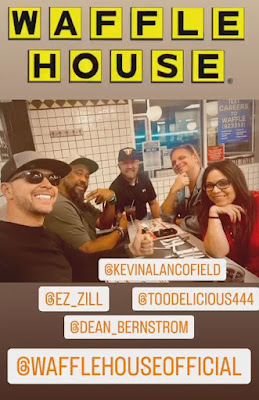 And in-between golfing and enjoying some food at the Waffle House, he made some time to wish fans a happy birthday:

On the tour bus making up for the birthdays I missed — with a bunch of belated Blockhead birthday tweets!

He also posted the selfies taken after the show in Lincoln and at the Wahlburgers in Milwaukee.
Here's a few other highlights from Donnie's IG stories: 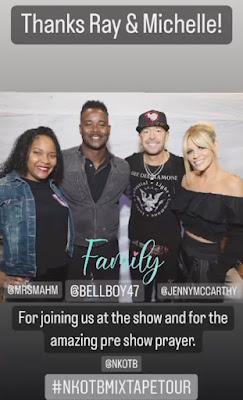 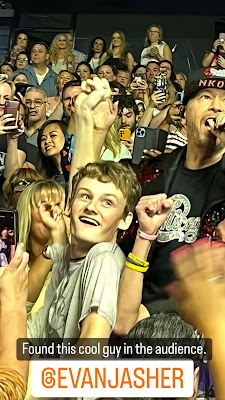 Danny had a chance to go home to Miami for a couple of days and spend some time with his kids and grandkids (photo from Danny's IG story): 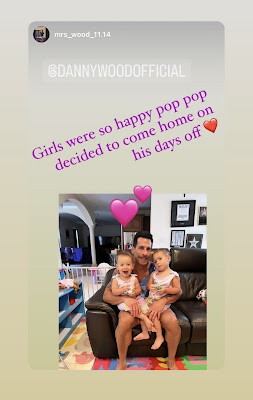 Joey had an opportunity to go inside Progressive Field - the home of the MLB team the Cleveland Guardians. Here is a "namaste" video from the dugout:

And this is awesome - Joey figured out how to make his old "namaste" videos available on Instagram! 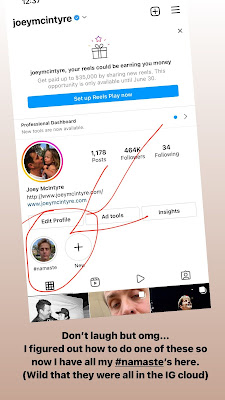 This is a couple weeks old, but I just found it in my saved videos. Joey is a proud dad watching his son Griffin perform (video from kmaher56):

Here is a nice article with a few quotes from Donnie and Jonathan from Finger Lakes Times:

New Kids on the Block are older, wiser and still hangin' tough

DETROIT — The New Kids on the Block were still new kids on the block, relatively speaking, when the teenage heartthrobs hit the Palace of Auburn Hills on Dec. 2, 1989, for not one but two sold-out concerts.

"Yeah we used to do matinees back then, too," says New Kid Donnie Wahlberg, who fondly recalls that chilly December day and meeting members of the Bad Boys, including Detroit Pistons coach Chuck Daly, and being pleasantly surprised that they weren't such bad guys after all (even though they'd disposed of Wahlberg's Boston Celtics in the Eastern Conference Finals the year prior).

It's now more than 30 years later and the Bad Boys are long gone and so is the Palace, but the New Kids are still hangin' tough. The Boston boy band has embarked on the latest iteration of their Mixtape Tour, this time featuring fellow '80s and '90s hit-makers Salt-N-Pepa, En Vogue and Rickroll king Rick Astley.

Playing arenas, then as in now, is a surreal feeling, Wahlberg says.

There's more time for reflection today as things move at a different pace than they used to for the New Kids.

The group — Wahlberg and Knight, along with Jonathan's younger brother Jordan, Danny Wood and Joey McIntyre — was a bona fide pop music sensation in the late '80s and early '90s. They crashed the charts with nine Top 10 singles between 1988 and 1990, three of which, "I'll Be Loving You (Forever)," "Hangin' Tough" and "Step by Step," went to No. 1. They almost single-handedly kept teenage magazines afloat, had their own trading cards and Saturday morning cartoon series, and their likenesses were plastered on everything from poseable dolls to pillow cases.

The burnout hit just as quickly, and the group split up in 1994, as the tides of the music industry changed and pop took a backseat to grunge. But after more than a decade apart, New Kids came back together in 2008, and have been reconnecting with fans ever since in ways they couldn't in the early days.

"When we were around the first time around, it was such mayhem that you really couldn't get close to fans. They would just rage — a happy rage," Wahlberg says.

With age, both for them and for fans, comes a better understanding of the performer-audience relationship as well as a management of expectations. Now the band members can safely go out into the crowd and even help themselves to a swig from a fan's beverage, as Wahlberg has been known to do, whereas before that would have meant being torn to shreds by rabid audience members.

The dynamic has led to a better, healthier connection with fans, Wahlberg says.

"We don't strategically say, 'hey, let's connect with our fans,' it's been established that that's what we do," says Wahlberg, big brother to actor Mark Wahlberg and a cast member of CBS' police procedural "Blue Bloods" for 12 seasons. "And I think we always try to give more every single time we go back out, and that's because the connection just grows deeper with the fans. And I think that's one of the reasons we've had more longevity this time than the first go-round."

Life's ups and downs have also made the New Kids realize how special that longevity is.

"I think we appreciate this in a way that we couldn't as kids, because we've grown up and been through so many things. And I think for our fans, it's the same thing," Wahlberg says. "They've all grown up and had families and lost loved ones and had divorces and had real life struggles, you know? And I think this is a chance for them to connect with part of their childhood, and be OK with It, which is a very, very special thing."

Back in the day, fan connection meant calling the New Kids hotline, which at its height received a reported 100,000 calls a week. Today, social media allows the group members to stay in contact with fans in ways that simply didn't exist a couple of tech generations ago.

"Twitter really helped us in connecting with fans, and really getting to know them, which is weird," Wahlberg says. "I know so much about so many of the fans, like where they live and what their husband does. It's great. It feels like one big family."

Jonathan Knight, who when not New Kidding is host of HGTV's "Farmhouse Fixer," may have had the roughest go of any of the New Kid. He was diagnosed with generalized anxiety disorder after his time in the trenches as a boy band icon. He didn't necessarily see a second life with the group for himself and is tickled they're still doing it at such a high level.

"I still pinch myself every day that we are back together," says Knight. "When we broke up, I never envisioned us getting back together, and even when we did, we had talked about just doing a 32-date reunion tour. And here we are, 14 years later, and we're still touring. So it's pretty special."

New Kids shows are still highly technical feats of choreography, and they're engineered to leave nary a moment of downtime from the entertainment of it all. So what's it like doing the teenage idol thing all these years later? (When Wahlberg mentions the group members are all in their 50s, a background voice chimes in, "not yet!" That's McIntyre, the baby of the group, who doesn't turn 50 until the end of this year.)

"The best reference is it's kind of like athletes," says Wahlberg, 52. "You hear athletes say the game slows down when you get a little older, and they're able to appreciate it more, and that's how it is for us. As kids, we were like rookies, the game hadn't slowed down. And it's all slowed down now, and I think we soak it up every night just as much as the fans."

The New Kids of today aren't sweating the Rock & Roll Hall of Fame not giving them a call, nor are they in competition with any of their contemporaries or heirs; ask if they're down for a Super Bowl halftime mega-collaboration with New Edition, Backstreet Boys, NSYNC and One Direction and Wahlberg responds, "why stop there?"

The New Kids aren't stopping, that much is for sure; as long as their fans are still having a good time, they are, too.

"Whatever is to come is not in our hands, we just enjoy it," Wahlberg says. "We're living our best boy band life."