New article about Jonathan and The Trustees

Jonathan shared a link to a new article from Gloucester Daily Times about the lawsuit from The Trustees:

Essex landowner fights Trustees lawsuit
By Michael Cronin | Staff Writer Jun 15, 2022
ESSEX — Scott Harmon, co-owner of a 6-acre plot at Bothways Farm, believes he’s being unfairly maligned by The Trustees of Reservations after the nonprofit organization filed suit against him in November.
The Trustees claims Harmon attempted to build a two-story home in violation of Bothways Farm’s conservation restriction. Harmon said he tried to play by the books but couldn’t keep up with The Trustees’ muddled and often conflicting guidance.
Harmon co-chairs King’s Court Trust, which owns the property, along with New Kids on the Block and HGTV personality Jonathan Knight. Troubles with The Trustees started in 2016 when Harmon and Knight sought to move the property’s original house 120 feet from the roadway. The Trustees informed them it was too far, saying the conservation restriction required structures to remain within the boundaries of their original footprint. However, The Trustees said the conservation restriction could be updated to accommodate King’s Court Trust’s wishes.
In anticipation of the updated restriction, King’s Court Trust dug the foundation hole. While The Trustees claimed in its suit it was blindsided by the purported conservation restriction infraction, documents provided by Harmon reveal the organization at the time advised against pursuing any action against King’s Court Trust.
What was initially promised as a three-month waiting period to amend the conservation restriction turned into a potentially years-long process to rewrite it in its entirety. Harmon believes this sudden change of plans didn’t add up.
For example, two years later, The Trustees granted King’s Court Trust’s request to place the property’s original barn hundreds of feet away from its original site. While the project reused some assets from the original barn, The Trustees reportedly confirmed it was considered a completely new barn.
Harmon questioned why this project was approved while they weren’t allowed to move the house. He said The Trustees’ representatives later told him the “overlapping footprint” stipulation was “just one lawyer’s interpretation” of the restriction.
Harmon also wondered how his neighbors were able to get much larger projects off the ground, such as a 60-by-120-foot metal barn west of King’s Court Trust’s property, without needing a top-down rewrite of the conservation restriction.
“We don’t begrudge the neighbors,” Harmon said. “We understand everyone has their own needs and they had to fight for their own work as well.”
In 2017, The Trustees granted permission for King’s Court Trust to build a new structure on the foundation hole. The trust’s plan was to use the structure as a replacement for the home already on the property. The Trustees reportedly told the trust that the kitchen and bathrooms in the original home had to be cleared out first. That way, it could stay on its original site as an “agricultural structure” and not a residence.
“We didn’t come to this decision to build a barn to remedy a CR violation” as The Trustees’ complaint claimed, said Harmon. “We didn’t agree with a new CR and always felt that the new structure location was reasonable on over 6 acres and the size was agreed to.”
King’s Court Trust chose not to begin construction on the new structure until it negotiated a formal approval to replace the original home. Eventually, The Trustees demanded the trust start construction in 2019 or have the approval rescinded. The 2017 approval never had an expiration date, according to Harmon.
That summer, Harmon claimed that Sally Naser, The Trustees’ conservation restriction program manager, told him the trust could pitch its conversion plan at a meeting of The Trustees scheduled in the fall. She also reportedly said the trust could begin laying a foundation for an attached equipment barn/garage, as she expected to get a full written approval in the coming weeks. However, once the second foundation was poured, King’s Court Trust was hit with a cease-and-desist from The Trustees. The fall meeting was reportedly never held.
“(Nasser) informed me that she couldn’t approve the equipment barn/garage because the matter was now out of her hands,” said Harmon. “(The Trustees) forced us to start construction then forced us to stop once construction started.”
The lawsuit followed in late 2021. Harmon said he was surprised by the number of accusations The Trustees made. For example, the chicken coop and garden shed that replaced two dilapidated sheds between 2015 and 2017 were suddenly considered a violation, despite representatives from The Trustees “never (having) an issue with these or told us they were a violation until they filed this lawsuit,” according to Harmon.
The Trustees also cites the trust for hosting “non-agricultural, social events” on the property’s agricultural facilities. Harmon said these included a wedding ceremony for Knight’s relative at the garden shed, an 80th birthday party for Knight’s mother and a family Thanksgiving dinner in the barn during the height of the COVID-19 pandemic.
Since the lawsuit was filed, Knight has been living in his neighbor’s old home, which he purchased late last year. His property’s original home, now without a kitchen or bathroom, has since been moved across the street to land not covered by The Trustees’ conservation restriction. At this time, there is no housing on King’s Court Trust land.
The 2017 structure has not been worked on since the cease-and-desist was issued. It stands as a wooden skeleton slowly being weathered by the elements. The Trustees claims King’s Court Trust’s planned residence far exceeds the conservation restriction’s size limitations, but Harmon contests it was designed with these regulations in mind. He believes the nonprofit is incorrectly counting non-heated portions of the home, such as a planned screened-in deck, as “living space.”
The Trustees declined a sit-down interview for this story, citing ongoing litigation.
Michael Cronin may be contacted at 978-675-2708, or mcronin@gloucestertimes.com. 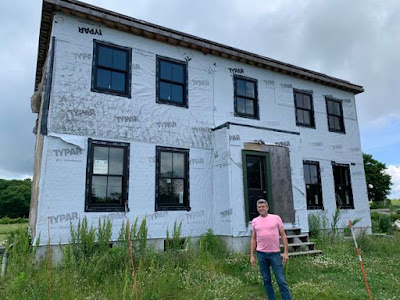 Scott Harmon stands in front of the structure he's been trying to build since 2017 at Bothways Farm. The Trustees of Reservations demanded construction to start in 2019 then issued a cease and desist after foundation for an attached equipment barn/garage was poured. 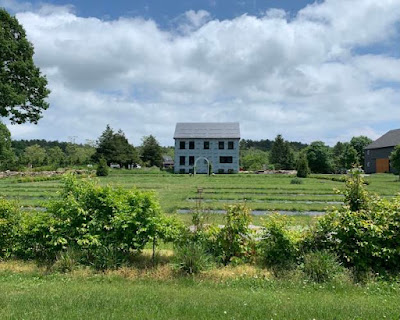 The Trustees of Reservations claim this structure off King's Court is in violation of the property's conservation restriction. Property co-owner Scott Harmon claims he did everything in his power to build by the books despite The Trustees often conflicting communication. 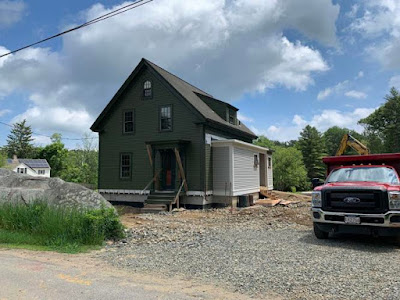