Joey McIntyre to star in DRAG: The Musical

Right after I published my post from earlier today about Joey being "on set" in Vancouver, I have an update on Joey's latest project - or at least one of them! Joey will be joining the cast of "DRAG: The Musical"!  Performances will be on Fridays and Saturdays starting September 23 through October 15, 2022 at The Bourbon Room in Los Angeles! Click here for tickets!

I'm not sure if this news relates to his "on set" post. I don't know if Joey would be wearing sideburns for a show that he dresses in drag for. I would also guess it would make more sense to do rehearsals for "Drag" in LA. So maybe he has more than one project going on?

Update: according to this Instagram post from Drag The Musical, rehearsals start next week, so I'm thinking these two projects are probably not related... 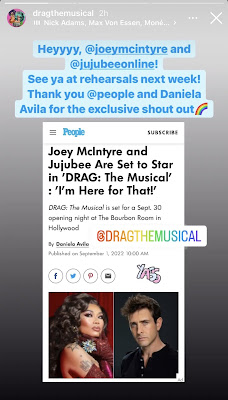 Joey McIntyre and Jujubee Are Set to Star in 'DRAG: The Musical' : 'I'm Here for That!' DRAG: The Musical is set for a Sept. 30 opening night at The Bourbon Room in Hollywood

Joey McIntyre is ready to step into the world of drag!

PEOPLE can exclusively announce on Thursday that singer-songwriter McIntyre and drag icon Jujubee are the latest to join the cast of Alaska Thunderf---'s DRAG: The Musical, which is set to debut in September.

"I'm so excited to jump into this fantastic new musical and the world of Drag," McIntyre, 49. said in a press release. "It's my experience that it's a place of learning, accepting and loving one another and having a blast while you're doing it - And I'm here for that!! See you at the Bourbon Room, baby!!"

McIntyre will play the role of Tom Hutchinson in DRAG: The Musical, which tells the story of two rival drag bars that go head-to-head for survival amidst financial troubles. The "I Love You Came Too Late" singer has previously starred in musicals like Wicked, the original off-broadway production of Tick Tick Boom and The Wanderer.

Meanwhile, Jujubee — best known for being a contestant on RuPaul's Drag Race — will play The Tigress in the production.

"Drag: The Musical quite literally combines the two things that fulfill me the most," Jujubee said. "Can it get much better than this? I am so excited to have this opportunity and be a part of this incredible cast as the Tigress. Meeeeow!"

The show's opening weekend will take place on Sept. 30 at The Bourbon Room in Hollywood. Meanwhile, there will also be show previews on Sept. 23 and 24.

"This musical we have been writing for the last six years is finally coming to life. It's wild to see the seeds that we planted starting to bloom, and I'm so blown away by the level of artistry that the whole cast and team have brought to this," Alaska said in the press release. "This musical speaks to a ton of issues that are really important today— gender identity; family, whether genetic or chosen, gentrification and a f—ed economy, and most importantly… Drag. I'm so excited to bring this story to life and share it with the world."

"This is a once-in-a-career opportunity," said co-producer Matt Weaver. "We are absolutely thrilled to be a part of this groundbreaking musical and debut it at The Bourbon Room!"

The musical follows the release of DRAG: The Musical (the Studio Recording) in May.

Tickets are available on FeverUp.