Donnie and Bridget Moynahan were joking around about the yellow floor that leads to the Blue Bloods family dinner table, and Donnie broke into song: 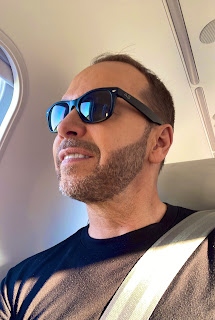 It looks like he’s on a tv or movie set! His location was tagged as “stuck in the 70’s”.  He’s also sporting the same sideburns that he was during his video wishing Debbie Gibson a happy birthday. I noticed he used the term “disco” there too.

I don’t think this is related to “Drag the Musical”. As far as I can tell, that play takes place in the modern day. I’ve also been looking at some social media posts from some of the other performers and I haven’t seen Joey since the first day of rehearsals.  I think Joey has more than one project going on right now.

In an IG story featuring the reel, he thanked actress Brec Bassinger for the help in making his first “TikTok-ish #reel”. So who is Brec? According to her IMDB, she is best known for her role on the CW series “Stargirl”. I thought maybe that’s what Joey may be guest starring in, but it doesn’t appear that the show takes place in the 70’s.  So, I don’t think that’s it. Brec Bassinger also has another entry on her acting credits: a movie called “Saturday at the Starlight”. There is very little information about this unreleased film, but here’s the poster from IMDB: Looks kind of 70’s/disco to me! But, IMDB says it takes place in the 90s and that it’s already in post-production… and it was already filmed in 2017.  So that’s probably not it either.

She is in another movie called “The Man in the White Van”.  And that takes place in the 70’s! But, it looks like that one is in post-production already as well.

Joey’s last IMDB credit was The Goldbergs which aired earlier this year, so it appears whatever they’re  working on is not listed yet.  One other thing, Brec has also guest starred on The Goldbergs in the past.  However, I think that is set in the 80s.

So it’s probably none of the above, but I’m guessing we will find out soon! Joey is probably laughing at all this speculation, but I think he enjoys dropping little hints without completely giving away the surprise!