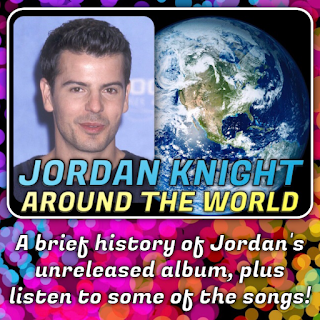 Did you know that Jordan actually recorded an album shortly after he released his first solo album? He started recording his second album in 2000. For some reason it took him a long time to record it and it's unclear why this album was never released. He started recording it under the record label Interscope, (which was the label his first album was under). However, he either was dropped or he decided to switch record labels.  I'm assuming because Interscope paid for him to record it and paid high end producers such as Jimmy Jam and Terry Lewis, they felt they owned the rights to the songs that were already made. Jordan recorded songs for the album in Minneapolis with Jimmy Jam and Terry Lewis, in England with producers Brian Rawlings and the Groove Brothers, in Atlantic City with Rodney Jerkins, and also in Los Angeles.

Here's a brief history of the album...

Here is an article about it from MTV:

"There's elements of everything from polka to doo-wop," producer Jimmy Jam said last week. "It's crazy — a very eclectic record."

The falsetto-voiced pop star is working on the disc in the Minneapolis studio of Jimmy Jam and partner Terry Lewis, who were also among the producers on Knight's 1999 self-titled solo debut. The pair are producing six of the album's tracks and will probably mix the entire LP.

"Around the World" will likely be the disc's first single, and it also stands a good chance of being the album's title, Jimmy Jam said. The song takes an even bolder approach than "Give It to You," Knight's debut solo single, which mixed accordions, hefty grooves and waltz breaks.

"The only way that we've been able to figure out how to describe the song is it's sort of Dean Martin meets Sisqó. You know how 'Give It to You' was quirky? This is the next level of quirky."

Knight has said the new material is on the whole more uptempo than his debut because he believes fans are craving fun, danceable music.

The singer also plans to do some recording in Los Angeles, but there was no word at press time who will produce the album's remaining tracks. The disc is expected in stores this spring.

Here is a post from Flyte Tyme (the website for Jimmy Jam and Terry Lewis) somewhere around 2001:

Around the World for a Second Time

"Crazy." "Eclectic." "Danceable." Those are just some of the hype things that people are saying about Jordan Knight's upcoming sure-to-be-a-smash-hit record!

Jimmy & Terry produced seven tracks for the new album, which will be called Around The World With Jordan Knight. It will probably be released this July.

Jimmy says "there's elements of everything from polka to doo-wop. It's crazy - a very eclectic record."

Jordan says the stuff he put together for this new album is way more up-tempo than his debut album because he thinks fans are craving really fun, danceable music.

Text saved from a post at jordanknight.com on March 5, 2002:

Just wanted to drop in and say hi and thanx to everyone! It's Jordan believe it or not. (not an imposter). I got all my music done (thank god), and had fun doin it (most importantly). Now I'm going through a little red tape before the record gets released. I'm not that fond of the corporate business world but it is the music "business" as they say .o.k. talk to yous later, gotta get on the PlayStation with Dante. peace!

Hey guys, don't at all be concerned about why I do my music. It is mainly to touch other people. Also, when you are working with a big money machine (Interscope), it takes time to convince them you're gonna make some money (unfortunate, but true). Hey they have people to answer to also. But don't ever think I'm doin it out of obligation, cuz I'm not. My album will be out soon enough, and hopefully everyone will be happy! Thanx for all the posts and I'll talk to ya later!

JK has moved on from Interscope and we are in talks with different companies that want to put the record out.

Right now I'm pretty fed up with all record labels. I'm in the process of starting my own just for all of you. I really feel I have been hindered by the corporate world and my main passion is to get my music to my fans....that's it. So please be patient cuz I'm workin hard to get my music to you. I've already finished a couple songs I believe you'll enjoy. So just stay tuned to the website cuz it's coming quick. I've realized this is the best way for me to get my music to you. Always, thanks for all your love and confidence in me!

Here is a partial track list and clips of the songs if I was able to track them down. If anyone has better audio, or audio from any of the songs I don't have, send them my way!

According to NKOTB History on Twitter, he released this song on September 7, 2004. I don't know if it was actually available for purchase.
Video courtesy of Alex Clarke

I believe they also considered this song as the first single since a radio station played it when Jordan did an interview with him. Thankfully someone recorded it! Producer Ron Fair also worked with him on this song.

Video courtesy of MARI A

One of the Jam and Lewis songs. Even this one must have been in consideration to be a single since someone was hired to create a music video concept for it. This audio was recorded off YouTube when the music video concept was posted. (The original video is no longer available.)

Radio station Z104 Madison played "Around the World" once in 2003 in a "new music" feature (it was probably a head-to-head battle with another new song). However, no one knew about it until after it was broadcast. So we know there is a studio version of this song out there somewhere! The radio station posted a small clip of the song on their website:


Here is audio from a live performance circa 2004 (if you know who originally recorded this, let me know!)

Below is audio only from a live performance from around 2004 (if you know who originally recorded this, let me know!)

Players Get Broken Hearts Too

Be With You Tonight

Underneath A Spanish Sky

There are probably a few more that I don't have titles for. Let me know if you know of more!

Great post, as always! I can’t imagine pouring your heart into your work only to be prevented from sharing it the way you wanted to. That must have been so frustrating.

I saw the post on youtube from Alex Clarke that he has more unreleased Jordan Knight songs - check comments under the song "Try". I don't know who Alex is but I hope he posts the rest.

I have only two questions if anyone could help me.
1. Why the duet between Jordan Knight and singer Mya never happened?
2. Who was the girl featured in NKOTB's CIWYW video in a black babydoll dress, she stood out among the other two women who were in Jordan's scenes. The other two dressed a like while she was in something different. She seemed shy and etc.