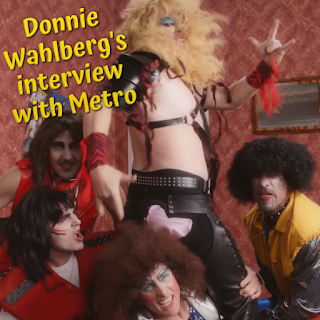 Donnie was recently interviewed by Metro.co.uk! He talks about the possibility of him and Mark Wahlberg doing a movie together in the future, a "wardrobe malfunction" while filming the "Bring Back the Time" video, and his thoughts on getting older and remembering the time when "life was a little simpler". Here is the article:

Donnie Wahlberg confirms plans to shoot movie with brother Mark but warns: ‘My abs are coming for him’

Mark and Donnie Wahlberg have entertained us separately on-screen for years – but fans can expect the brothers to finally come together in the same film.

Older sibling Donnie, 52, is best known as a member of New Kids on the Block and for starring in films such as The Sixth Sense and Saw, while he is also the lead in long-running TV series Blue Bloods.

His younger brother Mark, 50, is also a big blockbuster star with hit movies including Ted, Transformers, The Italian Job and most recently, Uncharted.

The two may have a tight-knit relationship in real life and run in the same industry circles, but they’re yet to cross paths on-screen.

Well, that could all change as Donnie has confirmed he plans to co-star with his baby bro in the future.

Speaking to Metro.co.uk, the Step By Step singer teased: ‘I think we will do a movie together for sure, at some point. Both of us when we started out acting coming from music, we were both so focused on overcoming the concept that musicians can’t be good actors. So I think he got very focused on trying to break that very stereotype, and I did too.

‘We got really entrenched in our own journey of trying to make it in a different field that we were known for. So both of us didn’t really think about working together because we were so trying to be able to consistently work individually.

‘I think as we get older, if the right opportunity comes up we would absolutely do something together.’

So, with Donnie well known for his dramatic turns and Mark fully immersed in the comedy space, what would a Wahlberg brothers movie look like?

‘For me, if it’s something fun not too dramatic,’ Donnie revealed. ‘I love drama and [starring] in Blue Bloods being dramatic. But Mark and I have made each other laugh our whole lives so I’d love to see what we could do with something comedic.’

‘I don’t want to say a buddy cop movie but a buddy movie for sure.’

However, he did also send a friendly warning to his sibling as he laughed: ‘And he’s not the only one with abs, by the way, he’s going to think he’s got the abs covered – I’m coming for him!’

New Kids on the Block are back on the scene with a brand new single, Bring Back The Time, which throws it back to the 80s and reminds us of a simpler time to be alive – you know, the time before pandemics and all.

The music video is a whole lotta fun too, with NKOTB and their collaborators Rick Astley, En Vogue and Salt-N-Pepa, donning 80s-style costumes and replicating iconic videos from the likes of Michael Jackson and Twisted Sister.

It wasn’t without its challenges though as Donnie recalled: ‘I did have one wardrobe malfunction when we were doing the Twisted Sister bit, and I had on some leather chaps – they broke.

‘I might be a little too heavy for the chaps so I think they weren’t meant to be worn by me. They didn’t quite hold up to my booty shaking, which I did a lot of in the video. I was well covered so there was no issue but it was pretty funny.’

Donnie went on to share what he misses most about the 80s and, as much as he loves the music obviously with NKOTB blasting onto the scene that decade, his nostalgia has a deeper meaning.

‘What I probably miss and where the song is connecting with people is just, if you grew up in that era. For so many of us and a lot of our fans, we just miss that age of innocence. It’s not so much about the time – it’s about our time,’ he explained.

‘We’re all growing up so fast, I mean gosh I’m 52! I don’t feel it but there are times when reality hits so many of us and as we get older, loved ones in our lives who have been with us our whole life, they pass on. I lost my mum last year, I never thought she’d not be in my life.

‘As we get older, I personally think it’s important to allow ourselves to have fun and tap into that innocence we all have and that sense of when life was a little simpler for everyone.’

He added: ‘A lot of people feel the same way because the song and video are resonating with so many people and bringing back such a nostalgic feel.’

New Kids on the Block’s new single, Bring Back The Time, featuring En Vogue, Rick Astley and Salt-N-Pepa, is out now.