The cast and crew of Blue Bloods get a sneak preview of @NKOTB’s “Bring Back the Time” (video from @DonnieWahlberg on Instagram) pic.twitter.com/gy73XzaW7L

Joey shared a few thoughts about the conflict with Russia and Ukraine (watch the video he referenced here):

Donnie posted this video clip of Ralph McDaniels (host of the The Longest Running Music Video Show NYCTV) hyping up the song "Bring Back the Time".

This is kind of cool... Here's a couple video mashups from Konkr33t that combine New Kids on the Block songs with Slipknot songs!

And the New Kids on the Block officially announced their appearance on Good Morning America:

We’re excited to announce that we’ll be appearing on @GMA this Thursday as we perform BRING BACK THE TIME for the very first time with @TheSaltNPepa, @EnVogueMusic and @rickastley.

We’ll also be talking all things #NKOTBT (don’t forget to pre-save 😉) and #MixtapeTour2022! 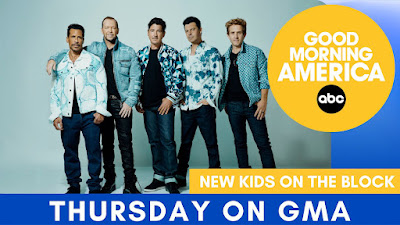 Don't forget the new single "Bring Back the Time" will be released at 12 midnight tonight!
Posted by NKOTB News at 8:41 AM

So excited about this. Just found my way back to the fandom after almost 30years away, and they drop a single just before my birthday (5 March)!
Thanks to everyone who's been supporting them all this time, so I had such a great community to come back to.